If you have astronomy binoculars, you may be wondering what you can see with them. The following lists celestial object you can see in the night sky with binoculars. It includes both northern and southern sky objects that you can target.

Discovering the night sky through binoculars

You can find and view many celestial objects in the night sky with binoculars. For example, you can observe the Moon and its many features, stars and star clusters, and even deep sky objects: galaxies and nebulae.

Of the planets, Saturn and Jupiter offer the best planetary views through binoculars.

See my articles on viewing Saturn and Jupiter.

Star charts and online night-sky apps will help you locate the binocular targets listed below. For tips about using these, see my article on how to use sky maps/star charts for beginners.

A set of 7x 35 binoculars will do as a starter. Larger (ideal 10x) is better, but just know that the larger the set the more of a challenge they are to hold steady for long when observing.

For a stable hold, you’ll need a tripod. Try fitting them to a camera tripod. Otherwise, support your arms by leaning on a fence (for example) to stop the binoculars from moving when you’re focusing on an object. I cover ideas on how to steady them in my article about binoculars for astronomy beginners.

Stars and planets seen with binoculars

As a guide, the binocular limit for stars and planets according to their brightness expressed as apparent magnitude is +9. I’ve compiled a list of sky objects against their apparent magnitude to give you an idea of what you could reasonably see with astronomy binoculars. Knowing the best time to stargaze will help you get the most of your experience.

See the planets through binoculars

Planets make great targets for binoculars — See my article on how to find planets.

What you’ll see of Venus through binoculars is its phases, like that of the Moon. Don’t expect to see features of Venus through your binoculars, just the phases. You might get to see a thin crescent at times. A 10×50 may pick this up if held steady under the right atmospheric conditions.

Can you see Saturn’s rings through binoculars? It may be difficult, but you may see faint rings of Saturn or just an orb shape looking at Saturn through binoculars, depending on how powerful your binoculars are. Saturn’s largest moon, Titan may be an easier object to see.

Can you see neptune with binoculars?

Neptune is a distant planet and you won’t see it with the naked eye. With a pair of binoculars, however, you’ll see it. But, it’ll look like a dim star. To find and track it across the sky, you’re best using an app or a chart that shows its path.

You’ll see dozens of the Moon’s craters and more. Here’s a list of what to find when looking at the Moon through binoculars.

Moon features to target through binoculars

Moon features to check out include the many craters, the seas (mares in Latin), the bays, mountains, and oceans (oceanus).

An easy feature to target with binoculars is Clavius, the largest crater at 230 km wide. And, it has two smaller craters within it.

Can you see where the astronauts landed on the Moon?

Yes, you can see where the astronauts landed on the moon. The place is in the Sea of Tranquillity (Mare Tranquillitatis), which is easy to spot. It is one of the flattest areas on the Moon and hence, why it was chosen. You won’t see the lunar lander, however. It’s far too small to detect given the huge distance between the Moon and Earth and it’s merely the size of a delivery van. 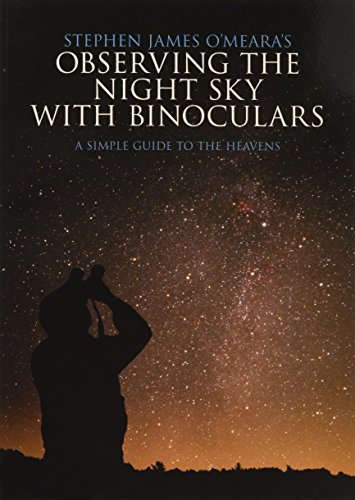 The following stars are generally easy to spot.

Antares is a red supergiant and shines with a reddish hue. It is one bright star in the summer sky sitting in the constellation of Scorpio. The name itself means rival of Mars in Greek and can be confused with Mars.

There are seven stars seen in what we know as the Big Dipper, also known as The Plough.

You can pick them out with the naked eye, but you’ll get a better view with binoculars, in particular of the stars Mizar and Alcor.

See if you can spot the 7 stars of the Little Dipper within the Big Dipper.

These are considered the pointer stars to the Crux (Southern Cross), noted for showing south in the Southern Hemisphere.

Three stars comprise Alpha, it’s actually a star system. One of the stars, Proxima, is the closest star to the Sun.

Well known star clusters include Pleiades and Hyades. Pleiades is known as the Seven Sisters , as asterism I wrote about in my article on the southern hemisphere.

The seven stars of Pleiades featured prominently in the lore of indigenous cultures around the world, including the Australian aboriginals, American natives, and Chinese.

However, there are more than seven stars to this cluster. Looking at Pleiades through binoculars you’ll see several dozen stars in this star cluster. But, all up there are approximately 400! Who knew?

November through to March.

Alcyone is the brightest star in the Pleiades star cluster.

Hyades (pronounced “HIGH-uh-deez”) a little over from Pleiades is another star cluster you can view with binoculars.

November through to March (ThoughtCo).

Similar to Pleiades, there are about 400 stars in this cluster all up. Of which you might see 6 or 7 with your naked eye.

You’ll find the Beehive star cluster at the heart of Cancer.

It is an open cluster visible to the naked eye and one to see with binoculars rather than a telescope.

Melotte 111 is an open cluster in Coma Berenices that has about 50 stars that can be seen by the naked eye.

The Jewel Box, proper name Kappa Crucis, is an open cluster located in the southern constellation of Crux. This one is a gem to see for the Southern Hemisphere viewers. It’s visible as a hazy object by the unaided eye but through binoculars, it’s an impressive sight.

To find it, locate the star Beta Crucis. Three members of this cluster are known as the traffic lights as they lie in a line with varying colors.

A cluster that can only be described as spectacular and which is best seen with binoculars.

This one is diamond-shaped through binoculars.

This is an open star cluster, also known as the Wild Duck Cluster. It’s in the southern constellation of Scutum. It is quite compact and through binoculars it is a patch that’s diamond-shaped.

Open cluster below Sirius. This is should be easy to find.

Open clusters. M46 is located in the southern constellation, Puppis. It is easy to find with binoculars as it lies near Sirius, the brightest star in the sky.

M46 through binoculars of the size 10×50 appears fuzzy and somewhat like a nebula. Through larger binoculars, you should see about 50 stars (though dim) in a large open cluster.

M47 lies just west of M46 in the same constellation and you can see both in the binocular’s field of view.

This Double Cluster involves two open clusters. It is faint and so seeing it through binoculars is best compared to the naked eye. Look for a 3 or E of the northern constellation, Cassiopeia the Queen. Above this is the Double Cluster, which will appear as a faint hazy patch.

The M in the names of the following stands for the Messier catalog (M) and the integer/s denote its entry number.

You’ll find the global cluster, M4, just to the west (1.3 degrees) of Antares in the southern constellation, Scorpius. It is elongated vertically.

The Messier Objects site describes how you would see it with 10×50 binoculars: “the core region appears quite bright and is surrounded by a halo of light.”

With a pair of binoculars, you’ll find the M13 in the Hercules constellation. It contains a massive amount of stars, as in over 100,000, and with binoculars, it appears as a fuzzy patch. See if you can discern a clear center.

This M22 is an elliptical shaped globular cluster found in the southern constellation of Sagittarius. From the northern hemisphere it doesn’t really rise high enough for impresssive viewing.

To locate it, find Kaus Borealis, which is the star at the top of the teapot in Sagittarius. Then, look 2.5 degrees to the northeast.

The Hubble telescope found this globular cluster had extra features: two stellar-mass black holes, and six planet-sized objects. Don’t expect to see anything like that with binoculars. What you would see of M22 is a faint patch of light.

At certain times, the globular cluster, M62, is well placed for viewing with a pair of binoculars.

You’ll find M62 in the constellation of Ophiuchus. It’ll be faint and fuzzy, but just so you know, it’s a most irregular shaped globular cluster, according to NASA.

Also in the same constellation of Ophiuchus, the M19 globular cluster sits 4.5 degrees north of the M62 cluster. It’s fainter but much larger than M62.

To locate it, find Antares and then look 8 degrees east.

Binoculars are good for this night sky object. That’s because it is a large object and binoculars can take in a wider field of view than most beginner telescopes. For the brightest spiral galaxy, look for Andromeda, also known as M31.

A bright pair of galaxies.

Also known as the Pinwheel Galaxy. The guidepost to this is the Triangulum constellation. Involves about 40 million stars.

What to expect through binoculars: An fuzzy egg-shaped object with a brighter center formation.

The only one visible to the naked eye, the Orion Nebula is the nearest bright nebula that we can see in the night sky.

While it looks like an out of focused star to the naked eye, through binoculars it appears as a fine hazy patch of light in a cup shape.

Lagoon Nebula (M8) is the next brightest nebula after Orion.

The brightest planetary nebula we can see is is the Dumbbell Nebula, alson known as M27.

Is it possible to see the ISS with binoculars?

You can see ISS through binoculars, and make out its shape as well. You just need to plan for when it will be passing over and be able to track it as quickly moves across the night sky. Thus, it might be challenging.