What’s a Dobsonian and why is it different to other telescopes for astronomy? In the following, I discuss the said Dobsonian telescope advantages and disadvantages and why ‘Dobs’ are recommended for beginners.

Who is this for? Anyone looking to buy a Dobsonian or has already bought one and wants to know more about them to get the best value.

Why is this important to know? Understanding the telescope’s pros and cons will help you decide on the best option for you if you’re in the market for a new telescope. If you already own a Dobsonian, then it’s important to know how to get the best satisfaction from your instrument.

The name, Dobsonian, arises from its designer, John Dobson, who devised it back in the 1960s. It first became popular in the 1970s in northern California. Publicity helped its popularity and due to its ease of use and relatively low cost, it has become one of the most common telescopes recommended for beginners or for those wanting a larger reflector for the power, but at a lower price.

How do Dobsonians work?

The telescope sits on a simple altitude-azimuth mount with Teflon bearings allowing smooth movement in two directions — up and down and side to side (parallel with the horizon). You’ll find a diagram in this article where I explain the different telescope mounts.

A Dobsonian is a reflector type telescope and so uses mirrors rather than lenses to capture and reflect light for that image of your sky view. I explain the pros and cons of reflectors where I wrote about reflectors vs refractors.

Here’s a snapshot of the pros and cons of Dobsonian telescopes.

Main advantages of Dobsonians over other telescope types

Main disadvantages of Dobsonians over other telescope types

Yes, Dobsonian telescopes are good for viewing planets. With a 6″ Dobsonian, you’ll get to see the polar caps on Mars, the rings of Saturn, and the moons and bands of Jupiter providing you ave the right viewing conditions.

why get a Dobsonian?

If you ask a Dob user, they’ll say Dobsonians are less frustrating to use than others. Dobs are a larger scope but are easy to take out and set up. They are also easy to use and more stable than those mounted on tripods (which tend to shake when touched).

Price: The main advantage and reason most beginners opt for a Dobsonian is the price.

Why are Dobsonians ‘cheap’?

Dobsonians have a simple design of a tube, a set of optics, and a basic mount and it’s this design that makes them cheaper than other types of telescopes offering the same aperture size and power.

To further understand this…Mirrors cost less than lenses, which are the optics used in refractors and Schmidt-Cassegrain telescopes, and so the Dobsonians can be made more cheaply than other types of telescopes.

The bigger the aperture, the more it gathers light, right? The more light-gathering ability the more you will be able to observe the fainter details. You can buy a good-sized aperture in a Dobsonian for less than you would any other telescope type.

This is what is meant by Dobsonians giving you “the best bang for the buck”.

Simple fabrication: The second main advantage is the simple construction. This not only makes it more affordable but also quick to set up and easy to use.

No polar alignment needed: There’s no messing around setting the latitude of the mount so the azimuth axis points to the celestial pole.

Stable solid mount: The rocker style alt az mount is a solid stable construction as well as a simple design. You can use it without concern of breaking cogs or other finer parts.

From time to time, Dobsonians require collimation, which is the process of aligning the mirrors so that they work together to deliver well-focused light to your eyepiece.

It may seem daunting, but once you get the hang of it, collimating your telescope is not that difficult.

See also: How to collimate a Dobsonian

Dobsonians aren’t lightweight (but are transportable). You might take two trips from your vehicle to set it up in place and will need to consider where you intend to store it.

Because a typical Dobsonian is not computerized (a GoTo), you will need to figure out where to point it to see the object you’re interested in seeing in the sky. Finding the moon is not so much an issue, or the planets usually. But locating those not so obvious objects will require maps and some learning of the night sky. Check out our tips on using sky maps/star charts for beginners.

Dobsonians are not useful for taking photos of the night sky objects. But the positive of this is that (providing you’re not wanting to take photos) with a Dobsonian…there’s no need to spend all that time having to align the mount with the celestial north or south pole (depending on which part of the world you are observing from).

What is the difference between a Dobsonian and a Newtonian telescope?

Both are reflector telescopes. They have mirrors, not lenses. They have a primary parabolic mirror and a flat secondary mirror in an open-ended tube with a focuser for an eyepiece on the side.

The telescope tube of a Dobsonian is like all Newtonian reflectors.

Plus the optical assembly of both is much the same, where light enters the tube and is picked up by the primary mirror (objective lens), which reflects it on so that the light is concentrated onto the smaller secondary mirror (which is flat) and then finally into the eyepiece.

The Dobsonian mount is very basic and generally made of wood. It is a rocker box alt-azimuth style (left), which compares to the equatorial mount of Newtonians.

How to set up a Dobsonian

What is the best Dobsonian for beginners?

Amateur astronomers rate the likes of the Orion SkyQuest 6-inch as a good starting point for beginner astronomers wanting ‘the best bang for the buck’. Other brands include Saxon, Skywatcher, and Meade.

It’s an economical buy. And, a 6-inch aperture in a Dobsonian means you should get useful views of the moon and planets. A focal length of 1200mm and aperture of 6″ are good for planet viewing.

Look for one with a focuser made of metal rather than plastic. 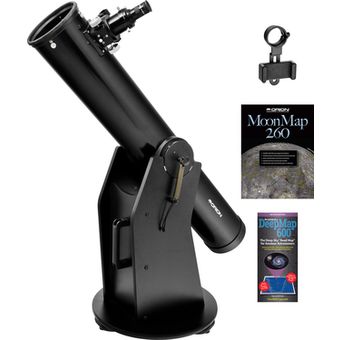 Are you looking for your first Dobsonian? The SkyQuest XT6 is a classic entry-level re… [More]

Or, if you prefer Amazon:


SkyQuest Classic — See it at Amazon

The 6 inch gathers a fair amount of light, and so you’d benefit from getting a moon filter.

The benefit of using a Telrad is that you’re not having to awkwardly place your eye up close to the finder as the bulls-eye pattern is visible from distances up to a foot or so behind the device.

I’ve recommended the 6″ here for beginners because the 8 inch and 10 inch ones are heavier and take a bit to move and store.

They aren’t that expensive.

Are Dobsonians Good For Astrophotography?

They are okay for simple moon shots, but the general answer is no, Dobsonians are not ideal for astrophotography because their alt-azimuth type of mount means you can’t track the object you’re wishing to shoot as it moves in the sky with the rotation of the Earth.
If you are into astrophotography, this is a disadvantage with these types of mounts. They do not follow the celestial object in the sky as the Earth rotates and the alt-azimuth mount requires manual adjustment with the two axes requiring different rates of rotation.

Dobsonians are recommended for beginner astronomers but are also valued by many advanced amateur astronomers. They are far cheaper and easier to use than other types (for the same size optics!) and have a simple stable mount. The downside is that they are not so compact, although you can buy ones with a collapsing tube.

However, if you are wanting to do astrophotography, a Dobsonian is not the answer.

How To Collimate a Dobsonian Telescope – Or All Reflectors [diagrams]

Using a Nature Spotting Scope vs Telescope for Astronomy

What to Look For When Buying a Telescope

What Can You See On the Moon With a Telescope

Best Telescope To See Planets From Your Backyard

Best Telescope Under 200 [What to Expect]

What Can You See On the Moon With a Telescope

The Best Time for Stargazing: Moon Phases and Seasons

Telescopes with SAVINGS up to $30 off!
At Orion

What To Look For In Astronomy Binoculars – Ultimate Beginners Guide

In addition to a great telescope, there are many reasons to consider a good set of binoculars for astronomy. ...

Best Telescope To See Planets From Your Backyard

With so many telescopes out there, it’s hard to know which one to buy for that experience you yearn. ...

Best Telescope Under 200 [What to Expect]

This buyer’s guide covers what the beginner needs to know on getting a budget-priced best telescope under 200. Best ...

Astronomy opens the door to the universe. It comes with having to learn new terms and technology. The jargon ...

Wanting better planet or moon observations? There are many modern eyepiece designs to choose from and knowing what to ...

If you’re wondering about that ring around the Moon and what it means, you might be interested in the ...

If you’re looking to buy or have already have one, you might be wondering ‘where should I store my ...

Celestron vs Orion Vs SkyWatcher (Which Brand Makes The Best Telescopes?)

You might be in the market for buying a new telescope and wondering which is better Celestron vs Orion ...

What’s a Dobsonian and why is it different to other telescopes for astronomy? In the following, I discuss the ...

Using a Telescope With Glasses Or Astigmatism [What To Know]

Should I use my telescope with or without my glasses? It’s a dilemma most eyeglass wearers have when using ...

Wanting better planet or moon observations? There are many modern eyepiece designs to choose from and knowing what to ...