There are books on the subject, like this one by Percy. But what makes them interesting night sky targets to hone in with your home telescope is that there are many types and you can challenge yourself to find them in the pursuit of helping astronomy. Read on… 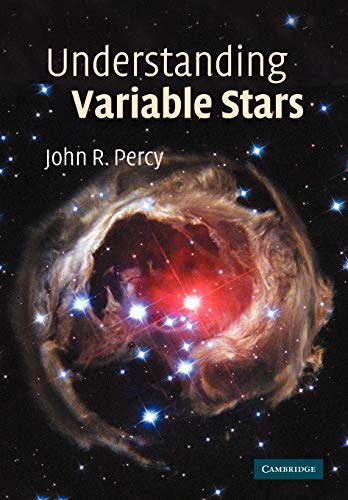 Title on the subject of variable stars
available at Amazon

Variable stars are stars that vary in brightness for an assortment of reasons. Unlike our Sun, which remains fairly stable, the output of light from these varies. They include stars that are shifting from one stage of their evolution to another, some are in the process of dying.

But there are several reasons for their varying brightness, which makes them interesting targets for backyard stargazers.

Understanding all the different variable stars helps astronomy in that it can reveal processes in the evolution of stars and the death of a star.

It’s easier to sight variable stars than other targets in the night sky of light polluted areas such as cities. And you can become part of a bigger mission to observe variables to monitor their brightness and so add to astronomical knowledge.

What are examples of variable stars?

Examples of variable stars include the eclipsing variables of Algol: Beta Persei, Beta Lyrae, and BL Telescopium, which are multiple stars.

Look for the supergiant BL Telescopium in Telescopium, a southern hemisphere constellation best seen from latitudes south of 33º during June to August. Its visible brightness is max 7.1–min 9.1, which means it’s outside naked eye viewing, at –6, but within the range for astronomy binoculars.

Another southern hemisphere example: The Eruptive variable of BV Centauri, a dwarf nova in the constellation of Centaurus. With an apparent magnitude of 10.7 to 14.0, you’ll need a telescope.

How many variable are there to see?

American Association of Variable Star Observers (aavso.org) is the place to log your information and they have manuals to download to help you do this to advance the science of variable stars.

The aavso.org site offers variable star lists and charts to print. For beginners, look for the Getting Started dropdown for the Manual for Visual Observing of Variable Stars.

If this is something you would like to get into, AAVSO have a list of easy stars to begin with.

To find out more about identifying and monitoring variable stars, check out these sites: